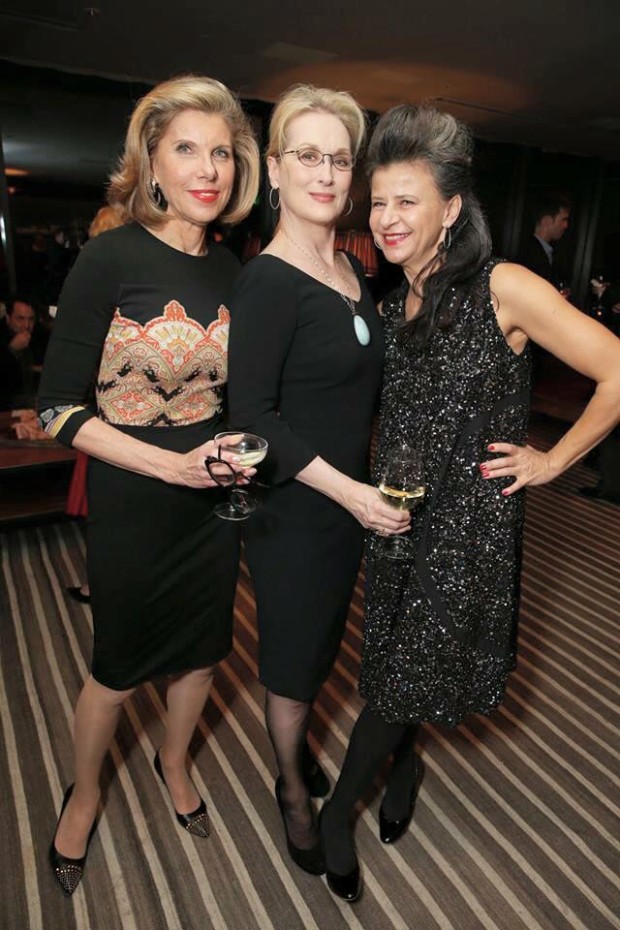 Being nervous for an interview with Meryl Streep, Tracey Ullman, and Christine Baranski is an understatement. I wanted to make sure I was prepared so I dashed for the bathroom 10 minutes before they were to arrive. As I come back from the bathroom walking fast, I see the beautiful and talented Meryl Streep standing outside the door. I started to panic and apologized to her that she had to wait for me. She was polite and said Hello to me. She also said there was no need to apologize as she was waiting for the other girls to arrive. I found my seat quickly just in time for Meryl Streep, Tracey Ullman, and Christine Baranski to walk into the conference room at the Montage Hotel in Beverly Hills.

Before all three sat down, Tracey Ullman takes a deep of fresh air and says, “Estrogen, I love the smell of it”. Everyone got a quick chuckle out of it which helped break the ice of us Mommy Bloggers and we began to ask questions.

The first impression I got of all three were that they were the best of friends (which they are in real life) and they talked to us as if we were all moms on a play date. They were so real and genuine with each other and didn’t mind sharing their family stories with us. 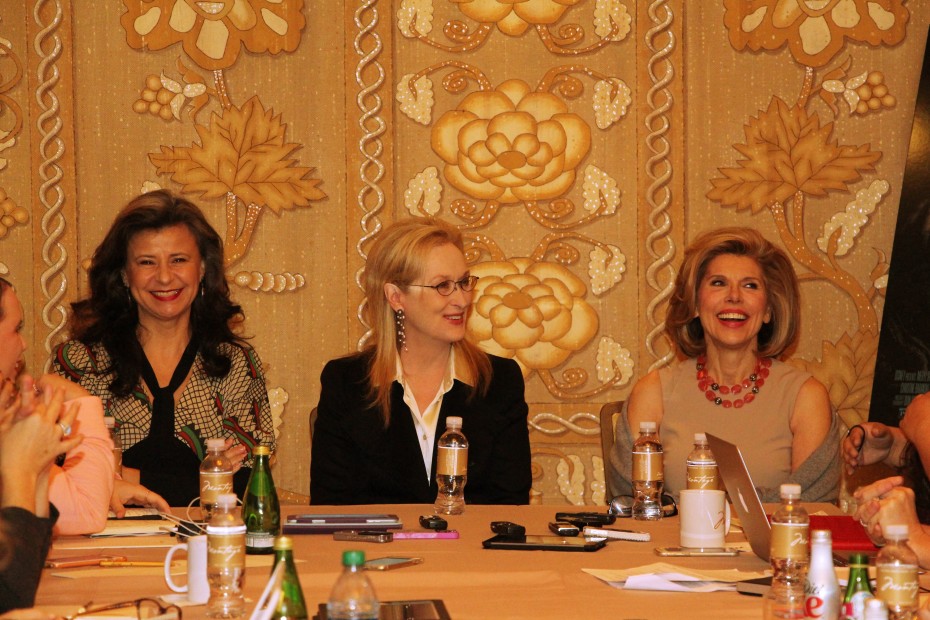 How they Met and Became Best Friends

Let’s talk about how they all met and became such great BFF’s. Tracey and Meryl have been friends the longest as Meryl (then 31) met Tracey (then 21) shooting a movie called “Plenty”. They started hanging out together and Meryl realized that she met her best friend. They ended up having kids at the same age.

Meryl and Christine met in Greece working on Mama Mia. Christine said they had to hang out all the time to do “research” for their parts and get to know each other. They had some things in common such as they are Connecticut moms and had kids around the same age.

“A real achievement is not just your career but holding your life together.”, Christine Baranski says. That is true for anyone out there and made me think about how true it really was.

Even though they didn’t get to spend a lot of time together on the set of “Into the Woods” due to different scenes but they had one fabulous dinner in London while shooting the movie. 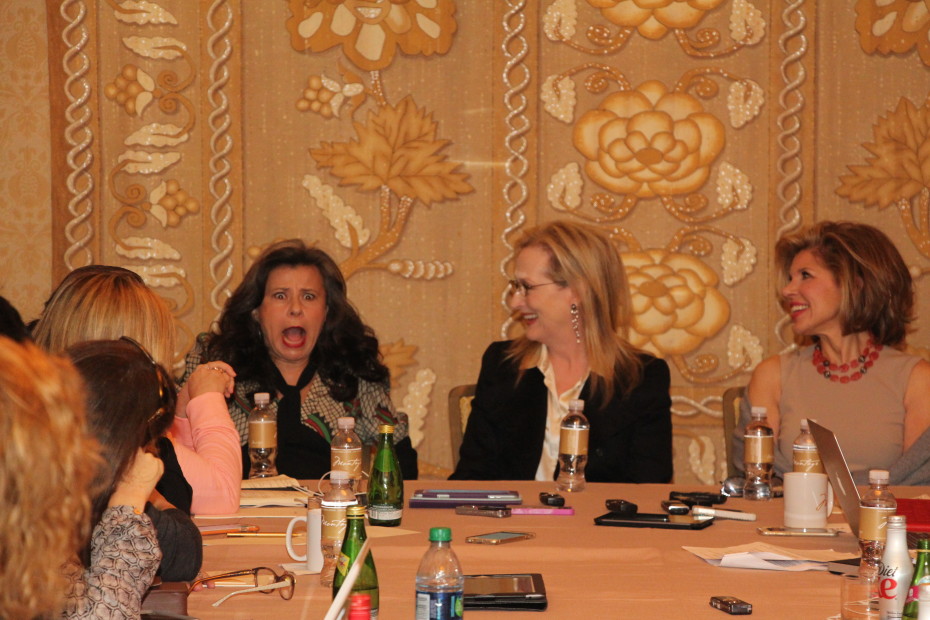 Going back to parenthood a blogger ask what advice can they give to us young moms. Meryl mentions how tough it is now on raising little kids than it was when she was raising her kids. She mentions how kids know so much now due to technology that it is hard to keep stuff away from them. Christine mentions that kids remember visuals and how when she was a kid seeing an African masks that stuck with her.

Christine even took away the TV set out of the living room to keep her kids away from the negative stuff because one day her daughter turned on the television set and there were male strippers on dancing around naked. And this was an afternoon show. After that she had it and took the TV away because it can’t be controlled with a click of a button.

Tracey mentions how disturbing it is to see families out to dinner because everyone will have an electronic in their hand rather than being a family and talking to each other. “I know how exhausted I was as a young mom and would put The Little Mermaid” on but never at a dinner table”, says Tracey.

Christine says to have moments where you take all that away and be able to experience real-time with your kids is a must. That way you can hear each other voices and let them use their imaginations. 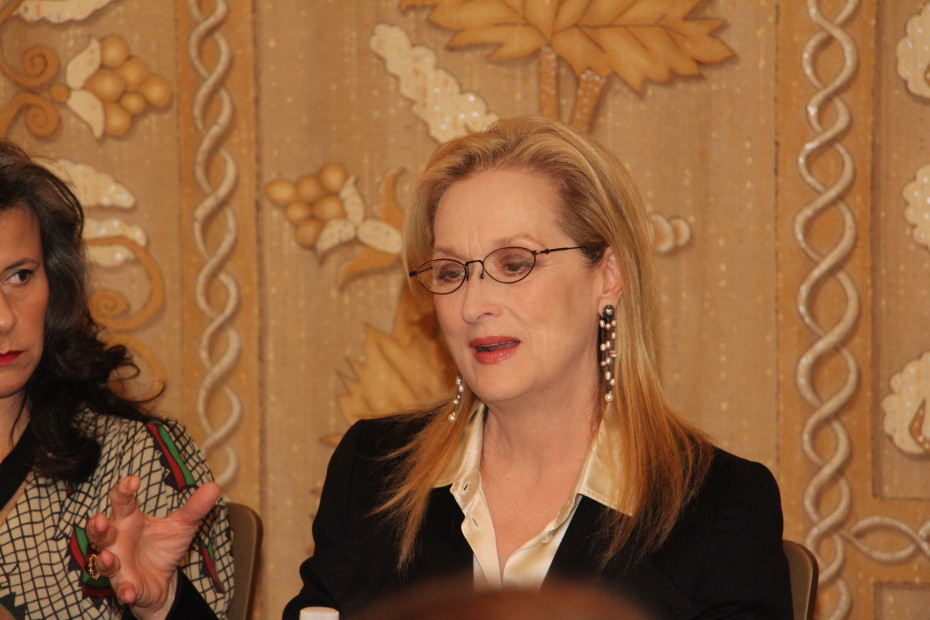 About their Character and Costumes

Meryl Streep goes on about talking how the director Rob Marshall told them to do what they want in the film and how she would have stolen from Bernadette more if she could remember. When the movie comes out on DVD you will find a song that was written by Steven Sondheim for Meryl (not in the movie) where she had a private lesson with him. She asked if she could keep the sheet music and if he could sing it. He agreed and wrote on the sheet music, “Don’t F**K it up!”.

The costumes for the step sisters were not perfect in any way. Christine was going back and forth to the set of “Into the Woods” and “The Good Wife” that there were quite a few times that the wig was not on perfectly. Nor was there time for makeup to be completed. As Christine looks at the film now and see that the wig and makeup is not perfect, she says, “That is exactly right, as these women try so hard to get it right, it is not perfect”.

Tracey Ullman loved her costume in the film as it was dingy so she was able to roll around in the leaves and get dirty. Peter King said that she was going to have a gray wig and she was excited to go gray. Tracey says, “There was no vanity and I loved it.”

Meryl talks about her blue hair in the film saying how they were making fun of the old ladies. You know where the old ladies use the rinse to get the yellow out of their hair but it turns blue. Then she comes out to LA and she all of these younger women with blue hair and says while laughing, “I’m on the Trend”. 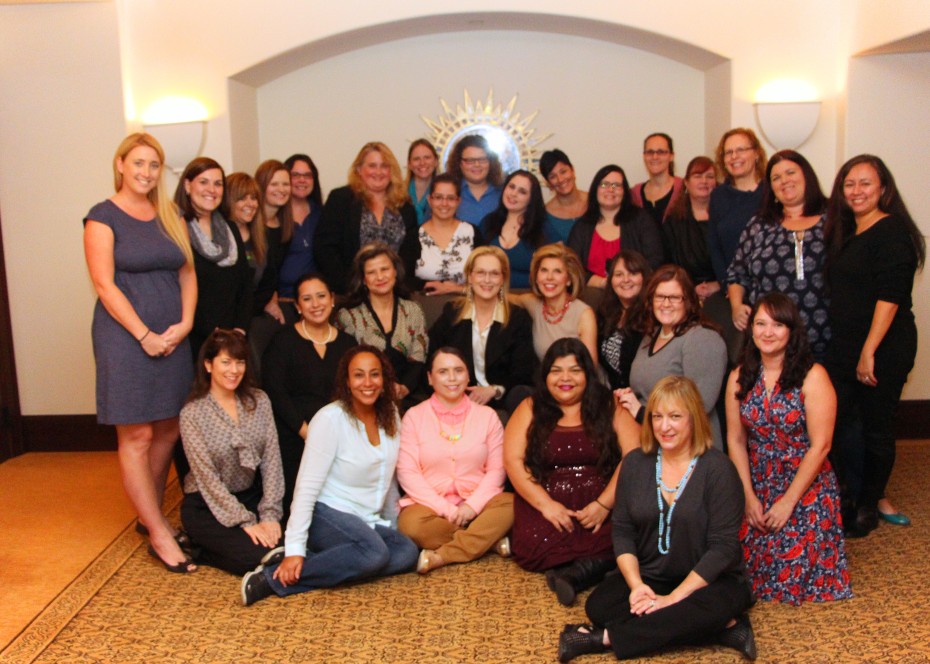 Seeing these ladies together laughing, enjoying life, and talking about parenthood shows that they go thru similar things as us parents. I loved hearing their stories and getting to know them better. They are just as funny in real life than the characters they play.

Watch the characters of Meryl Streep, Tracey Ullman, and Christine Baranski in “Into the Woods” on Christmas Day in theaters nationwide. I was so honored to be part of the #IntoTheWoodsEvent and saw the screening of Into The Woods Movie on 12/18 and able to share my review with all of you.

“Into The Woods” is the very first song you will hear each character sing at the beginning of the movie.  It is a catchy tune that is my favorite and you will find yourself singing it over and over again after you see the movie.

Disney’s Into The Woods movie is not your average fairy tale story. It is a modern twist of Cinderella, Rapunzel, Jack and the Beanstalk, and Little Red Riding Hood all in one story. It was adapted from the late 80s Broadway hit musical which was written by the legendary Stephen Sondheim and James Lapine, and now directed by Rob Marshall. The witch played by Meryl Streep puts a curse on the baker (James Corden) and his wife (Emily Blunt) where they have to retrieve items from the fairy tale characters to break the curse. Where else do they have to retrieve the items from but …. “Into the Woods”. Each character heads into the Woods for an adventure and comes along some obstacles and hilarious encounters. My favorite part of the movie is where Chris Pine (The Prince) and Billy Magnussen (The Other Prince) do a duo together in the water singing “Agony”. They are both acting like they are sexy while singing at the same time. You can see both of them rip their shirt open and splash water around. It is one hilarious scene. Cinderella is not your normal Cinderella in this film. You will find her having a hard time to decide if she really wants the gorgeous prince (Chris Pine) or not. Three times she goes to the ball and even by the third time she is still indecisive. Will she fall in love and marry him? See the film on 12/25 to find out. You will love the result. You will find a strange twist with Rapunzel played by MacKenzie Mauzy and will see who her mother really is in the film.

Even though the Woods are dark and mysterious the costumes are done brilliantly by Colleen Atwood where she adds the appropriate pops of dark colors that completes each costume. The director Rob Marshall knew what he wanted in this film and pulled it off. He has taken well talented actors and actresses and created one amazing film. He was even surprised by more talent he spotted as they were filming by the actors and actresses that he did not know about.

This is a movie the whole family can see on Christmas day as it is rated PG with a running time of 124 minutes. You might find it more appropriate for kids ages 8 and older as it may appear scary for younger kids. Seeing a movie on Christmas Day has become a family tradition for me and my family and I hope you can create that tradition with your family as well if you don’t already.  Even though it is based off of a musical, the movie is not entirely a musical. You will find more humor in it and a great story line that you don’t want to miss. Based on the Musical by: Stephen Sondheim and James Lapine

Music and Lyrics by: Stephen Sondheim