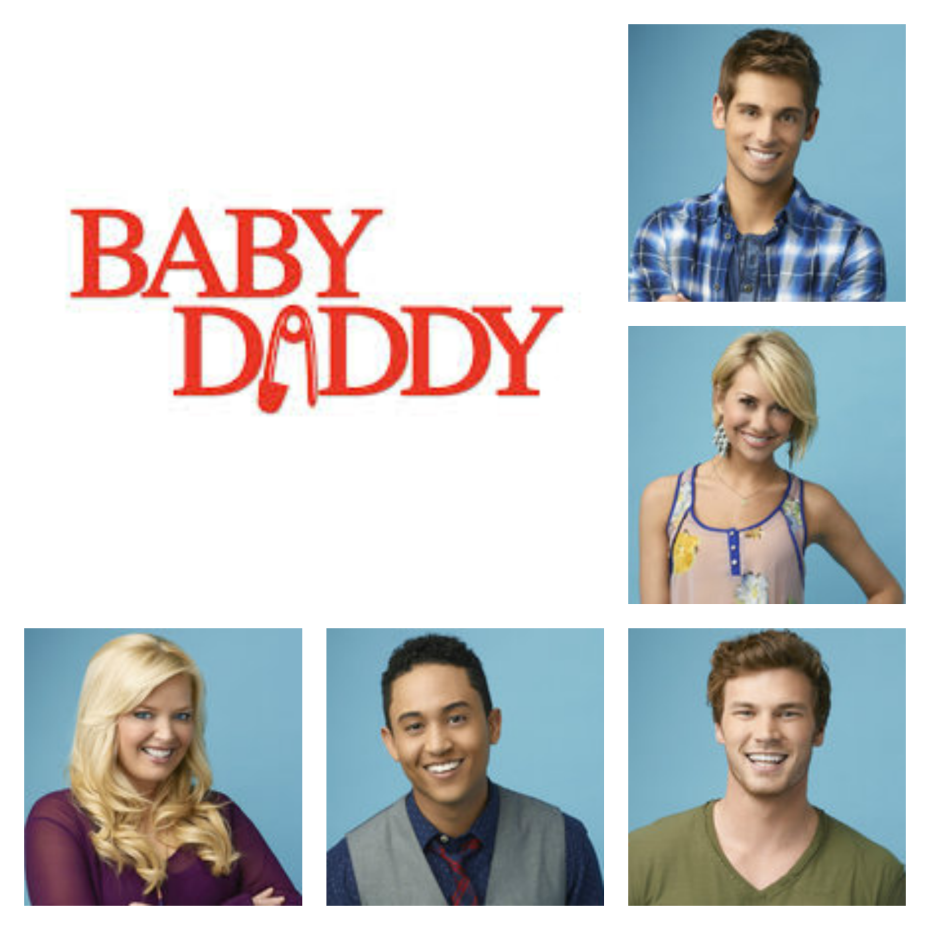 Tomorrow is the day of the season premiere of Baby Daddy and the shower scene. 😉 I had the chance to interview the cast of Baby Daddy during my visit to LA last month. The cast includes: Jean-Luc Bilodeau, Derek Theler, Tahj Mowry, with Melissa Peterman and Chelsea Kane. Have you seen the show yet? OMG! It is hilarious so you must tune in tomorrow, January 14, 2015 8:30/7:30c to watch.

Baby Daddy is a half-hour comedy that follows Ben, a young man in his early 20s living the life of a bachelor in New York City with his buddy, Tucker, and his brother, Danny. Their lives are turned upside down when they come home one day to find a baby girl left on the doorstep by an ex-girlfriend of Ben’s. After much deliberation, Ben decides to raise the baby with the help of his friends and his protective and sometimes over-bearing mother, Bonnie, and his close female friend, Riley. 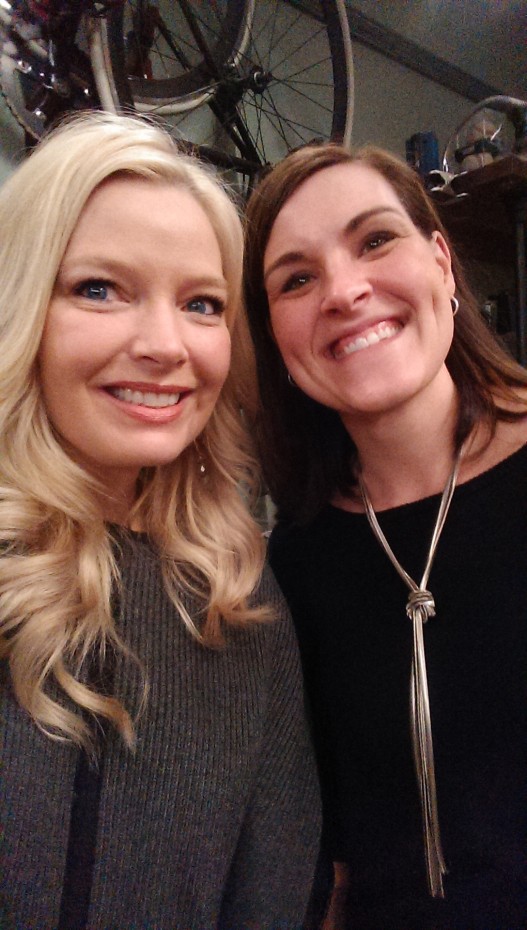 The first person to come out and interview is the hilarious Melissa Peterman who plays the mom “Bonnie Wheeler”. She wasn’t even suppose to work that day but wanted to come in and see us which I thought that was spectacular. As she sits down and talks about how they need to make a better looking pajama jean since she is a homebody and rarely goes out.

Melissa Peterman: They would say too much (laughing), because I tend to mother them – all of them. Like, I say ‘Is that what you’re wearing? Do you have socks?’ Like, you know, Jean-Luc will go to Canada to visit home, ‘Do you have warm enough clothes?’ I’m friends with Derek, Jean-Luc’s, and Tahj’s mothers on Facebook and feel like I am an older sister to Chelsea.

Q: Do you have a favorite episode?

Melissa Peterman: I loved Ranger Roos episode where Tahj and I were auditioning for the mascot. That was physical and fun. 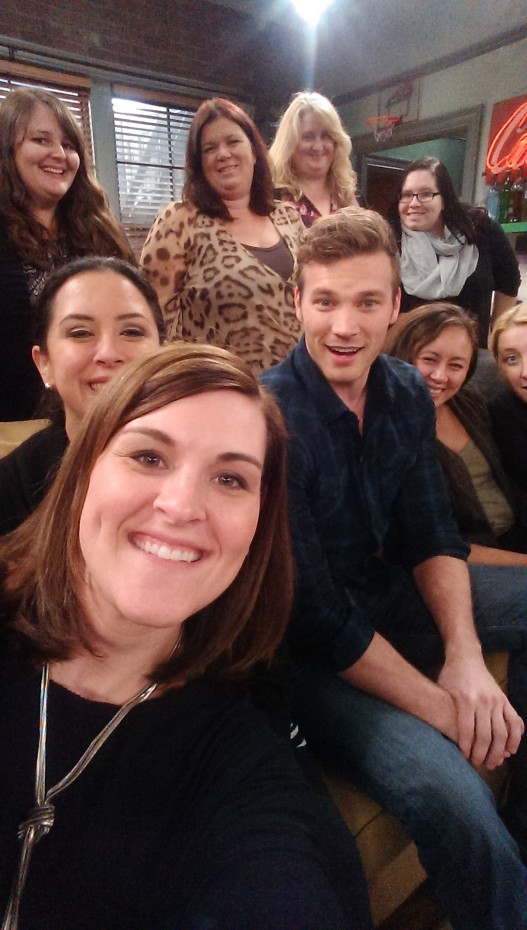 Next up was Derek Theler who plays the brother “Danny Wheeler”.  He told us how he went to school and graduated from Colorado State with a degree in Pre-Med. He was really nervous about the interview in front of us mom bloggers because he said he has never done this before.

Q: How is it to work with the babies?

Derek Theler: “It’s amazing, it’s great, they’re a set of twins playing one character. As the seasons go on we have to change twins. Otherwise, our original babies would be 4 1/2 years old.

Q: What has been your favorite scene shot from an episode?

Derek Theler: One of my favorite scenes is when I got to beat up a guy who was mugging Jean-Luc and Chelsea’s characters this season. I had to come up in a back alley and fight him. I also liked when I got to wear a full-blown centaur costume, I had a horse body. I’m bare-chested with horse legs and a horse bottom walking around on set. 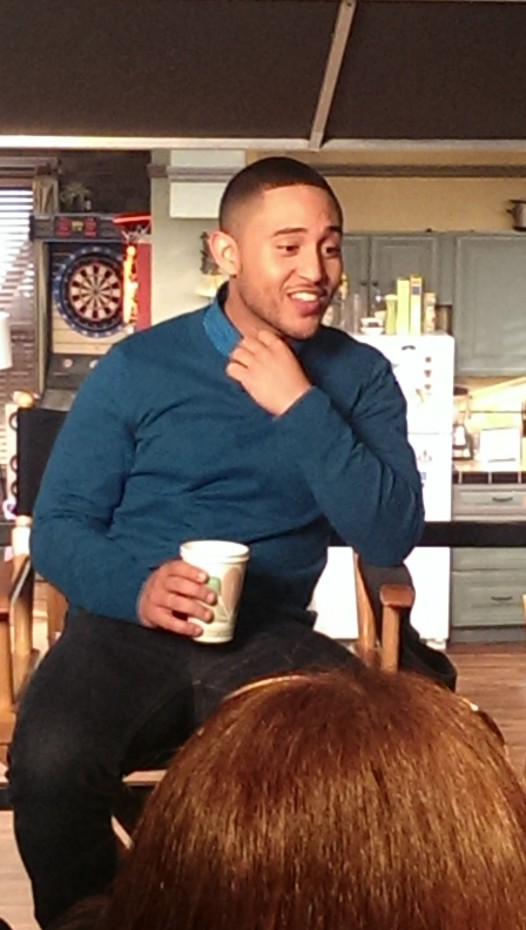 Arriving next for an interview was Tahj Mowry who plays the friend “Tucker Dobbs”.  As he is drinking his hot tea, he explains that he is just getting over from being sick but is no longer contagious.

Q: All of you have really good chemistry on-set, are you guys close off-set, as well?

Tahj Mowry: Oh, yeah. Chelsea was just at my house this weekend, we are like brother and sister. Derek and I like going to movies – we like action and superhero movies. Melissa lives like, two minutes from me and will beep the horn when she goes by.

Q: Are you working on any other projects right now?

Tahj Mowry: Yes, I’m putting the finishing touches on my album that I have been wanting to do for a long time now. The single comes out in February and I’m releasing some free stuff on iTunes before the actual single comes out. It’s a mix of Prince and Lenny Kravitz and will be available on iTunes or Amazon. The first single’s called ‘Walker’. 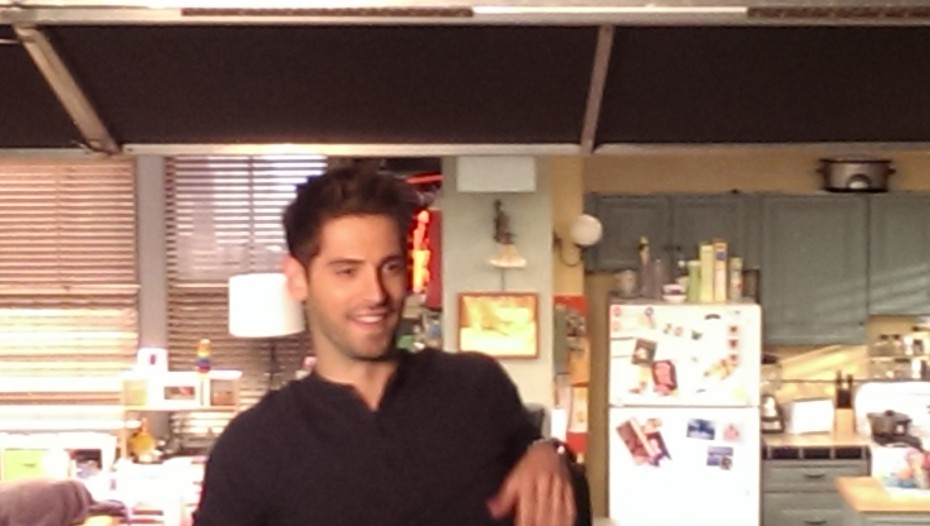 As soon as Jean-Luc Bilodeau sits down in the directors chair to be interviewed the flash bulbs go off like crazy from the mom bloggers. He’s cute, you know. 🙂 Jean-Luc Bilodeau plays the main character “Ben Wheeler”.

Q: Did you always wanted to be an actor?

Jean-Luc Bilodeau: My mom got me an agent when I was nine so I started in this business before I even knew what it was or before it was even a career like, option for me. I was doing commercials until I was 15 and then decided to get into acting. My goal is to direct an episode of Baby Daddy.

Q: Has the show changed what you know or how you feel about kids?

Jean-Luc Bilodeau: Oh yeah! (laughing) I have already liked kids to begin with, I’ve just never picked up an infant. Doing this show has warmed me up to the idea of having a bigger family than I originally planned on. Plus, it’s really good practice. 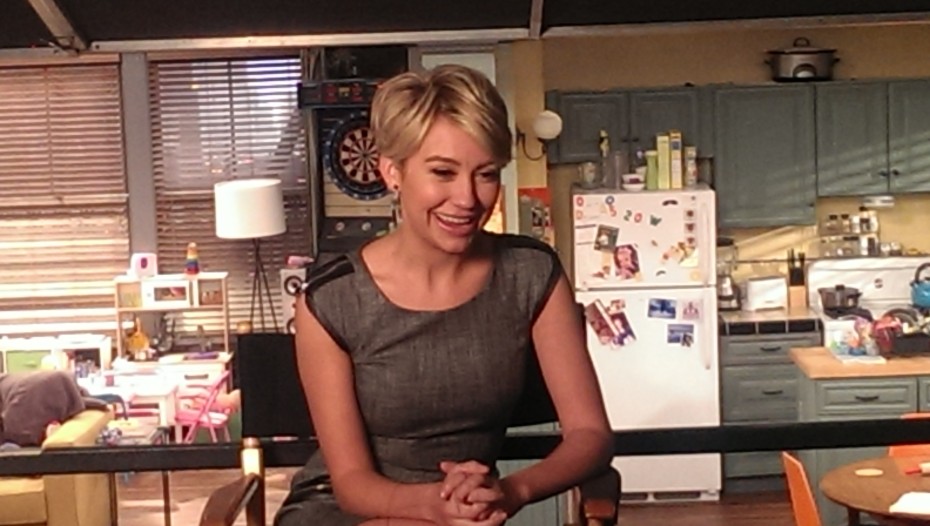 Last up was the beautiful Chelsea Kane who plays the friend, “Riley Perrin” and love interest of “Ben Wheeler”. You may have last remembered her from Dancing with the Stars (2011 season), in which she took 3rd place.

Q: Are there any ways in which you’re like your character on the show?

Chelsea Kane: I think we’re a lot alike in which we’re both a type A personality. I’m kinda a guy’s-girl, too, you know, a little more drama-free. Especially with this show, I honestly do like hanging out with the boys after work. We really do have a good time together. But outside of that, I am definitely not a lawyer. (laughing)

Q: Has the show changed about parenting in your perspective?

Chelsea Kane: At first I was uncomfortable around them and didn’t want scenes with me holding the babies. Now I can’t wait to see them and hold them. I love their clothes and baby smell. I feel ready to have kids at some point.

Baby Daddy will be back on ABC Family Wednesday, 1/14 at 8:30pm/7:30 CST so be sure to tune in. I was able to watch a preview of the show and it is one you don’t want to miss. Follow along with the hashtag #ABCFamilyEvent for more exclusive photos, behind the scenes, and more. 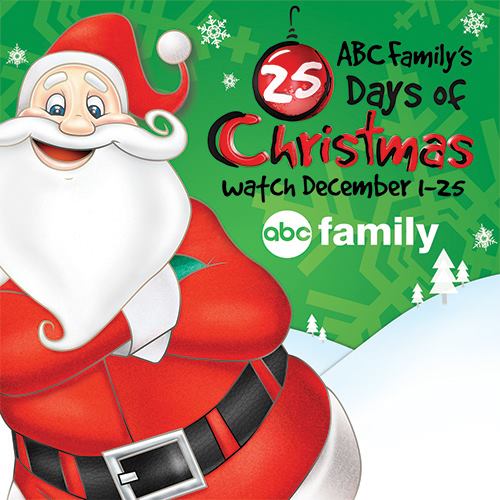 I am loving the ABC Family 25 Days of Christmas and have been watching it every night from the classics to New Holiday episodes. Head on over here to see the full schedule of ABC Family 25 Days of Christmas shows thru December 25th. Tonight, December 10th starting at 8PM EST is a special NEW Holiday Episode of Melissa & Joey and Baby Daddy. I will be watching tonight, how about you? 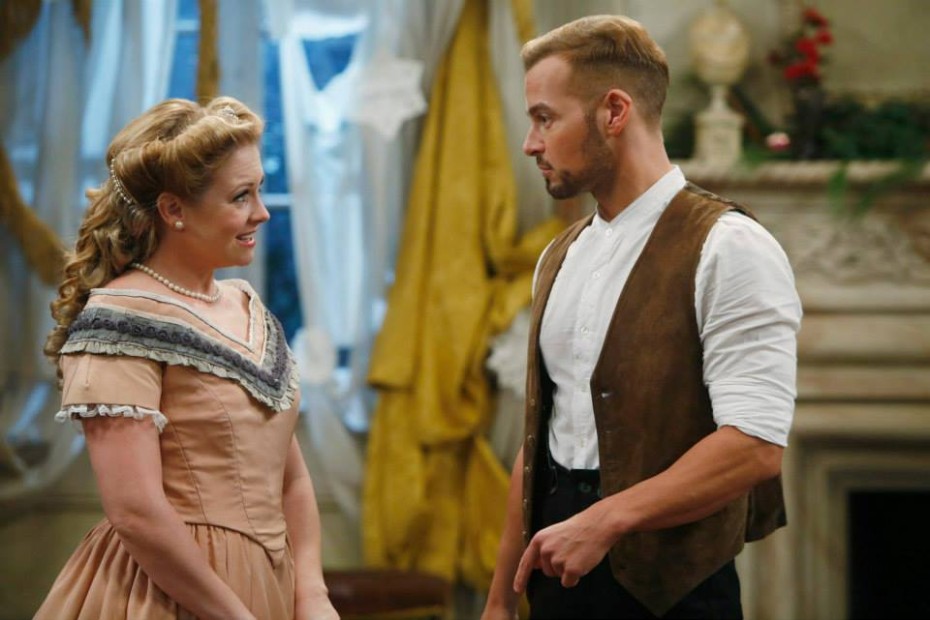 “Melissa & Joey” (8PM-8:30PM ET/PT) – In “A Melanie & Josiah Christmas” It’s Mel and Joe’s first Christmas as a couple, which leads to a competition over whose family ornament should take the prestigious top spot on the tree. To defend her ornament’s worthiness, Mel tells an elaborate tale about how the star came into her family over 100 years ago. Her great-great-grandmother Melanie was engaged to the town’s rich bachelor, Allistair, but her heart belonged to the lowly stable boy, Josiah. Trevor Donovan and Christopher Rich guest star. 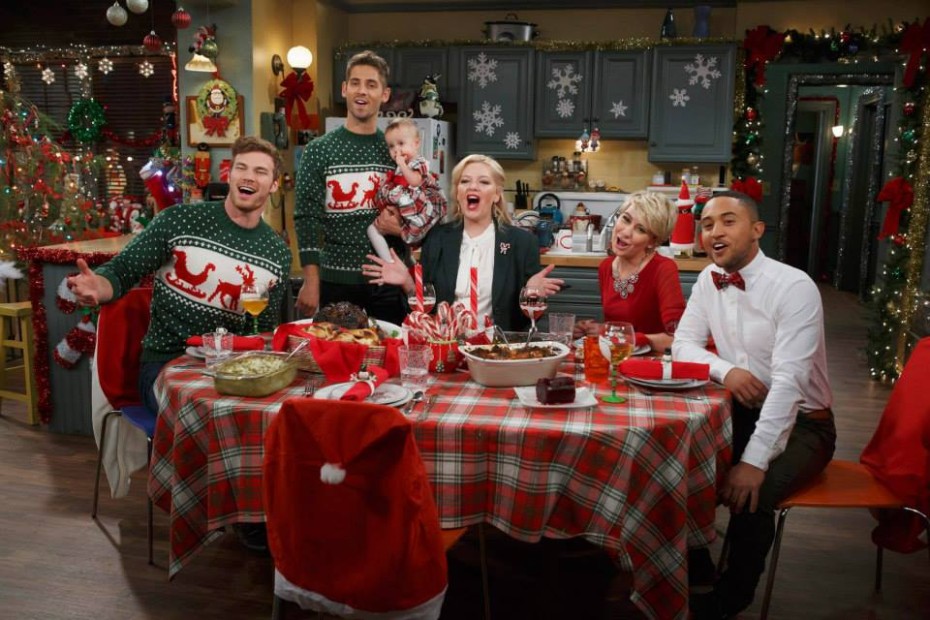 “Baby Daddy” (8:30PM-9:00PM ET/PT)– In “It’s A Wonderful Emma,” Ben channels his inner Scrooge as he detests everything that has to do with the holiday season – the shopping, the crowds, the tree trimming, even the pageant at Emma’s daycare. Adding to his bad mood are Bonnie, Riley, Danny and Tucker, who are overflowing with cheer until Ben can’t take it anymore and wishes there was no such thing as Christmas. But when his wish comes true and the holiday vanishes, he unwittingly erases Emma’s existence and alters the course of everyone’s lives. Can Ben get his loved ones to believe in Christmas and bring Emma back before it’s too late? Mo Gaffney (“Absolutely Fabulous”) guest stars as pageant director Hermione.

“Baby Daddy” stars Jean-Luc Bilodeau, Derek Theler, Tahj Mowry, with Melissa Peterman and Chelsea Kane. The series is created and executive produced by Dan Berendsen (“The Nine Lives of Chloe King,” “Sabrina, the Teenage Witch” and “Hannah Montana: The Movie”). “Baby Daddy” is a multi-camera comedy that shoots in front of a live studio audience in Los Angeles.

Both of these shows sound like some good episodes to watch and since they are a Holiday Special you don’t want to miss them. I will be curled up on my couch with a blanket tuning in to both episodes.