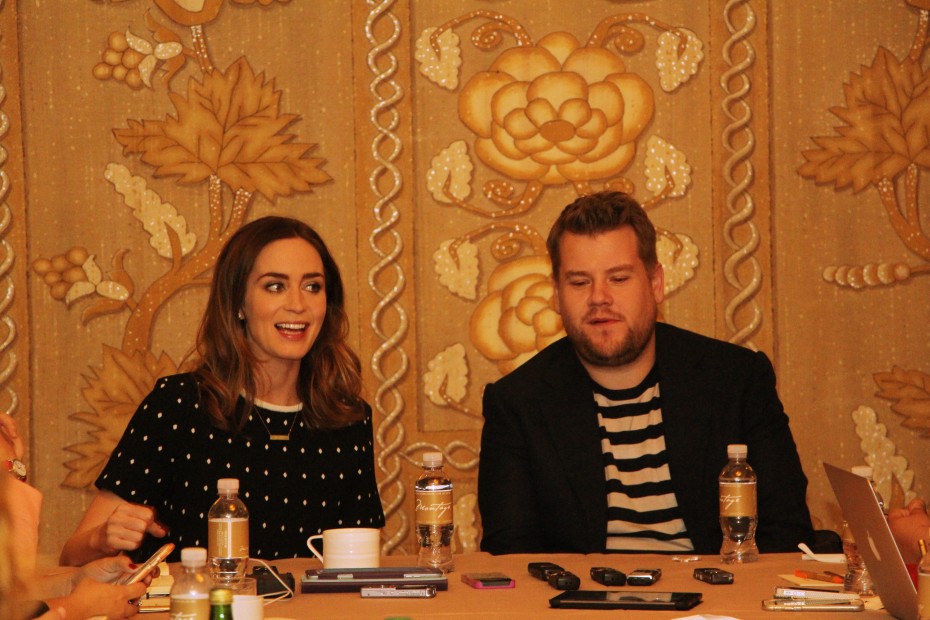 When you get two friends of 8 years with great chemistry and a British accent, the interview has gone “mad” as they will say. Meaning crazy or insane in British. That is what happened during the interview of Emily Blunt (the baker’s wife) and James Corden (the baker) of “Into the Woods” last Friday.

James Corden is a Tony Award winning actor, comedian, writer, producer, and now television host of The Late Late Show. Emily Blunt is a Golden Globe Award winning actress and has appeared in Devil Wears Prada, The Young Victoria, The Adjustment Bureau, Looper, Edge of Tomorrow. When the two found out from Rob Marshall that they were working together they were more than relieved because they have known each other for eight years when they met at a Polo Match where the princes Harry and William also attended.

As soon as the James Corden and Emily Blunt enter the room the laughter begins. James says, “Hi Mums” in his British accent and says, “This is my Dream”. He then jokingly asks Emily Blunt to leave the room as she is bringing his dream down. James starts talking about his wife and kids and then Emily looks over at him and points out some black stuff in James teeth. At this point all of us bloggers are just dying laughing because we know as moms that is what we would do too. 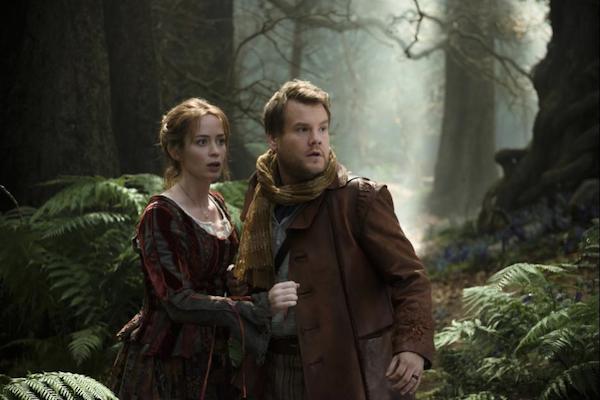 On Emily Blunt being Pregnant while Filming Into the Woods

Emily found out that she was pregnant the same time she found out she got the part. She thought about how she could pull this off being pregnant and filming at the same time.  She said it wouldn’t be a problem if she gained a few pounds since she was the baker’s wife. People would just think she ate a lot of the bread.

She was past the first trimester at the point of filming so she found she has so much energy which was good because she did a lot of running around in the film. She had a pregnancy chair on set that said, “Emily Blunt’s Pregnancy Chair”, where she would often find Chris Pine in the chair because he would say he was so tired. Towards the end of her pregnancy you can find her hiding in the film behind James Corden,  the cow, a tree, and more to help hide her bump. 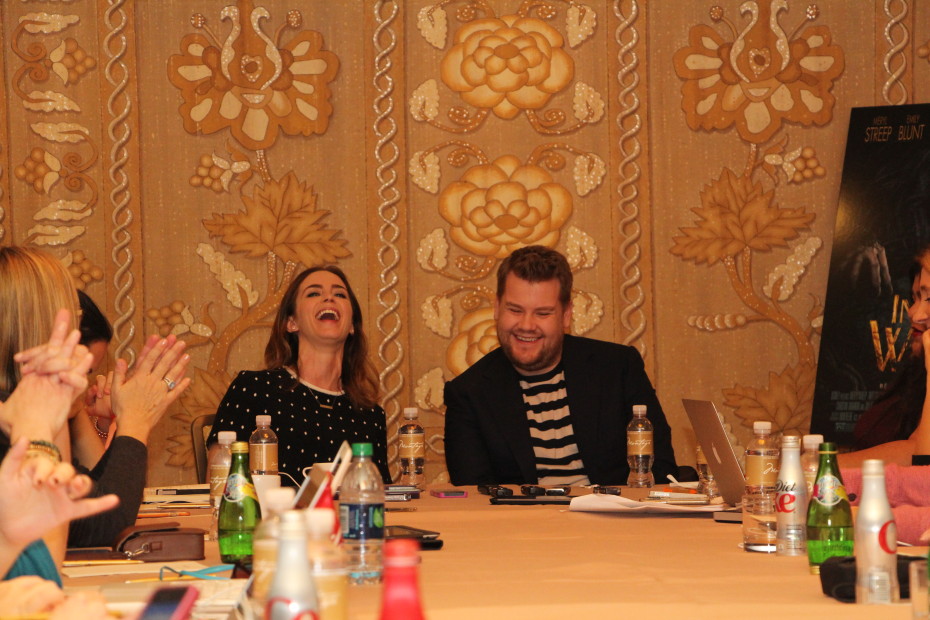 Working with the Kids in the Film

Lilla Crawford (Little Red Riding Hood) and Daniel Huttlestone (Jack) was in several scenes with James and Emily. James mentions that they’re both incredibly talented and gifted kids. Lilla Crawford was doing 8 shows a week playing Annie on Broadway and knew how to come to the set of Into the Woods and work and be professional. When she opens her mouth, she has a voice like a trumpet that sounds amazing.

Daniel Huttlestone is so gifted, musically and the coolest kid. He would sit down at a piano, and he’ll playing these ukulele- he’s, he’s the real deal says, James Corden. 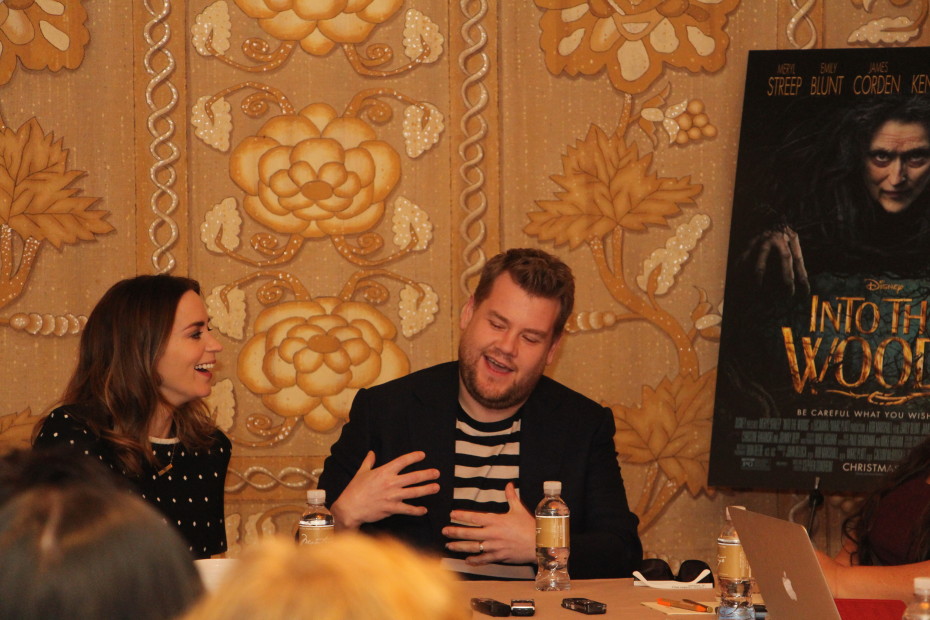 As many of you may know that Craig Ferguson retired from The Late Late Show this month and the new host will be the hilarious James Corden. He mentions that in this business opportunities come and go and when something comes along you go for it.  After shooting in Johannesburg for six weeks, Skyping his son on James’s birthday, he thought, this is only gonna get harder.

He is excited to be the Host of The Late Late Show because this is a job where he can go to everyday and be creative and at the end he can go home and be a father and a husband. And I just don’t think there’s ever a child when they’re twenty or thirty, sitting in a therapist’s chair going, do you know, my dad was just around too much, says James. He mentions how he feels very lucky to have such an opportunity where he can be home with his kids and family. 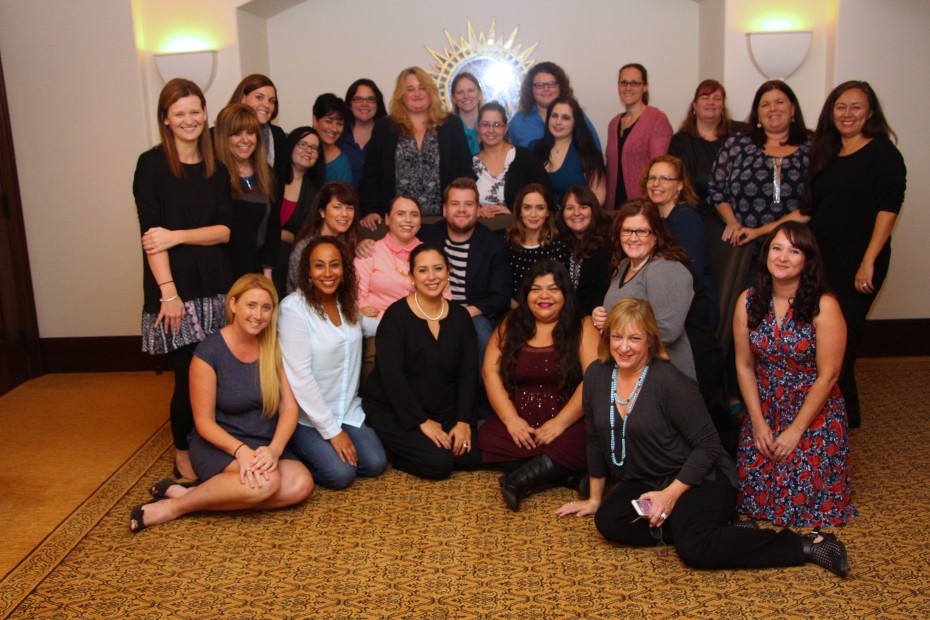 Read about Into the Woods Facts, Interviews, and more….. 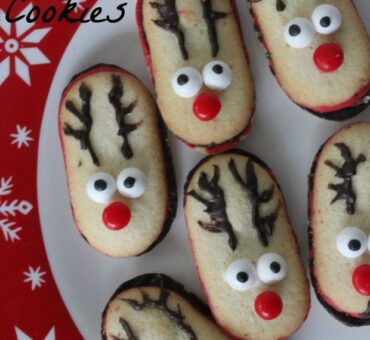 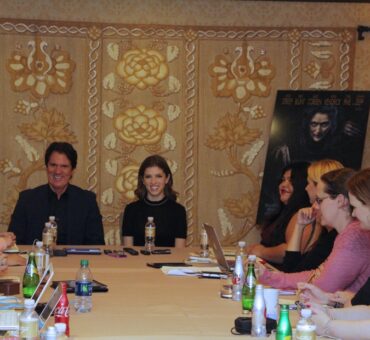